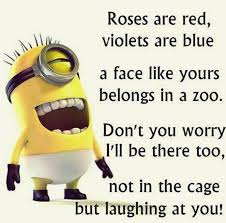 —–This is a Killer Joke: A man was leaving a café, when he noticed an unusual funeral. A funeral coffin was followed by a second one. Behind the second coffin was a solitary man walking with His Black Dog. Behind him was a queue of 200 men walking in a straight line.

The man could not stand his curiosity. He approached the man who was walking with the dog, ‘Sorry to disturb you, but I have never seen a funeral like this with so many men walking in a straight line. Whose funeral is it????’ He replied, ‘the first coffin is of my WIFE.’ ‘What happened to her???’ ‘My dog attacked and killed her. ‘The second coffin’, the man asked, completely puzzled.

The man with the dog said, ‘It’s my MOTHER IN LAW, she was trying to help my wife when the dog attacked and killed her too. A silent moment passed and then the man asked can I borrow the dog??????? And he replied, ‘GET IN THE LINE.’

—–Husband and wife both went for an interview in a big Company.  In the evening when they came home, the wife asked her husband:

Wife: ‘How was your interview today darling?’

Husband: ‘I have been rejected.’

Wife: ‘Why. What happened?’

Husband: ‘Because the first button of my shirt was open.’

Wife: ‘Strange!!! I have been selected for the same reason.’

—–A classic example of effective communication in an Indian household. An old man was on the operating table awaiting a complicated heart surgery on him and he insisted that his daughter-in-law, a renowned surgeon, perform the operation. As he was about to get the anesthesia, he spoke to his daughter-in-law.

‘Yes, Dad, what is it?’ ‘Don’t be nervous dear. Do your best and just remember, if something happens to me, your mother-in-law will come and live with you.’ The surgery was a great success.

—–Childbirth at the age of 65: With all the new technology regarding fertility recently, a 65-year-old friend of mine was able to give birth. When she was discharged from the hospital and went home, I went to visit her. ‘May I see the new baby?’ I asked. ‘Not yet’ She said I will make coffee and we can sit and chat for a while first.’ Thirty minutes had passed, and I asked, ‘May I see the new baby now?’ ‘No not yet,’ She said.

After another few minutes had elapsed, I asked again the same question and she replied the same answer and this went for quite some time.  Growing very impatient, I again asked in a frantic voice, ‘Well, when can I see the baby?’ ‘WHEN HE CRIES!’ she told me. ‘WHEN HE CRIES?’ I demanded. ‘Why do I have to wait until he CRIES?’ ‘BECAUSE I FORGOT WHERE I PUT HIM, O.K.?!!!!

Enjoy these fun loving jokes and laugh out loud till you drop from your chairs………..

This site uses Akismet to reduce spam. Learn how your comment data is processed.

This is my very first blog. Please spread and share the love of the universal force that is within all of us. Love & boundless blessings to all!!!! – Kamal
%d bloggers like this: